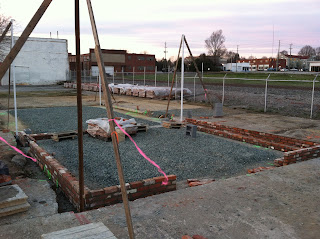 There's a new building going up in Siler City, North Carolina. It's the first building that's been built in downtown since the police station, so I have been told. It's being built right, using century old bricks reclaimed from an old factory that was taken down a block away. These hand made bricks were built of clay dug from the Earth in this county and were actually fired on the building site. It was different then. 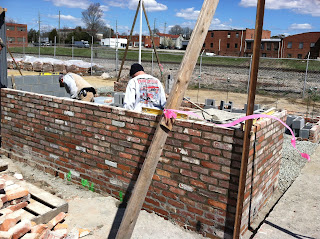 In a few days, the walls are getting taller as 2 pairs of hands painstakingly stack brick upon brick, mix mortar, and stack some more. The sun is brilliant today in a Carolina Blue sky. Eric and Victor took on this task and they are true tradesmen, very talented at their craft.

This is the new home for Gulland Forge Broadforks. The last year has been one of great transition as we searched for a place to call home. Moving a blacksmith shop is tough on a good day and a smith  has to be careful when choosing a stopping place. We found this town, or it found us... not sure which, actually. Either way, I'll post more on the adventure as we go along.

The broadforks are being made in a temporary shop right now, thus the low profile I have been keeping  for many months. I'll let you know when I am back in full production with a line of other fine tools that I'll be making in the new shop.

Good soil to you.