"A Chicken in Every Pot" 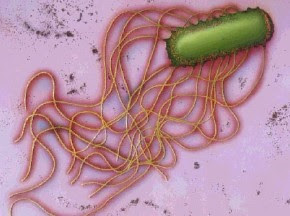 We've all heard it, but exactly where did that phrase come from? A little research and I found that in 17th century France, King Henry IV wished that each of his peasants should enjoy, "A chicken in his pot every Sunday." Later on, in 1928, though President Hoover never actually said the phrase, the Republican Party used the phrase in a 1928 ad campaign touting a period of "Republican prosperity" that provided a "chicken in every pot."
Yeah, and we know what happened shortly after that.
The metaphor of the chicken in the pot brings up all kinds of warm thoughts of visiting Grandma on Sundays and the closeness and joy of a family meal together, scents of home made foods wafting, and the crisp autumn air just right for a friendly game of football in the yard.
Go to the grocery store today and try to set that lovely Norman Rockwell scene with a factory farmed bird and you have to add some not so pleasant images and words. Let's see, "Arsenic in 70% of pots," "Salmonella in every pot,"  "Campylobacter in every pot," "Antibiotics in every pot," you get the idea.
For several years now, my wife and I have been watching the quality of food we purchase. We raised chickens at home and grew a lot of our own food, supplementing it with high quality local food when at all possible, and in general, being very careful what we bought and how we cooked it.
We recently spent 105 days camping, and in that time we ate a dozen meals out. You read that right. Sometimes we needed to stop in and use a wi-fi, and occasionally, we just wanted some fried chicken or a burger. Otherwise we did as Lewis and Clark would have done, as they were a great inspiration as we traveled through South Dakota and Nebraska, and a hard act to follow. We cooked our own, we also packed our own, and we bought high quality food as we traveled.
Raising one's own food supply is not easy or convenient or stylish, but it's high time a lot more of us did it, and none other than the main stream media has inspired me to post this today.
MSNBC.com posted an article today that everyone needs to read, then decide who you want to provide food security for you and your family. Clearly the USDA isn't doing a good job for us. Just take a look at the e. coli and salmonella contamination issues we have been faced with in recent years. As funding is cut to monitor food quality (and it WILL be) and food factories cut more corners in production (and they WILL), we will face a point in time where we're playing Russian roulette on our dinner plates.
Take your fate into your own hands and grow your own. It is the only way to insure that you will get good quality food. Grow your own vegetables and grow your own chickens. Find a way and make it happen. Start small, and learn your way as you go. Visit Harvey Ussery's site and get all the information you need to have to make it work for you. Do it today. This is really important stuff. If you can't grow it yourself, try to buy your food from a source you trust.
Here's that link to the msnbc.com article again
Gulland
Posted by Gulland at 3:41 PM 5 comments: 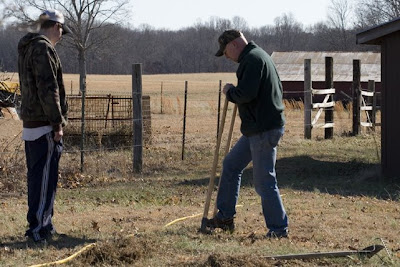 I had a great Saturday. We visited with Alex, who had recently bought his first house. It's on 5 acres with a barn and some fenced pasture in the rural outback of north central Alabama, and is a perfect a place for a young man in his 20s to begin. Alex has spent his whole life up there, surrounded by farmland and home gardens, but had never had one of his own. After my wife and I had a tour of his new place, he asked where he thought his garden should go.
We took a look around and decided on a spot, which was, coincidentally the same one his Dad had chosen. I told him we could lay it out and start working it with the broadfork and he could get some spinach started if he had some seeds and an old storm window to cover it on cold days.
Alex thought it would be a lot more complicated than that. He said, " So that's it?"  I told him we could lay out a line with a garden hose to get a look at exactly where it should go. We looked at the shadow of his (very nice) barn and of the surrounding trees, considered the approximate angle of the sun in a few more months, stretched the hose out and started working. I always travel with a broadfork lately, and I showed him how to handle it, then he tried it out. The soil was a sandy clay soil and was very easy to work.
As we worked, Karen and I talked with him about the foods he liked to eat, and how to get them started. He'd never had fingerling potatoes before, and from the look in his eyes as we talked about them, I think he'll enjoy them a lot, particularly when he digs up his first basket with his broadfork. He's going to have some really good potatoes there.
He seemed a little surprised that he didn't have to 'till' the whole garden, but just the rows that would be the beds, and it would look kind of like earthen corduroy. I told him I'd be back with my scythe when the grass got up to show him how that works to make great mulch.
I left my demo broadfork with him to work on the garden this week, and I plan on going back next weekend to see how it went. I felt like something very important happened there in the warm sun and chilly breeze of the last day of January. Alex really wants to produce some of his own food, and now I believe he is going to do it. He's off to a good start.
I think demystifying gardening is part of the challenge in getting someone started. From the outside, it seems like so much work, so much equipment, such a miracle to get food to grow in the Earth. I told Alex that when we open the ground and put in a seed and water it, we are simply letting Nature happen.
Try to help someone start their first garden if you get a chance. You'll feel good about it, I promise.
Gulland
Posted by Gulland at 7:12 PM 14 comments: