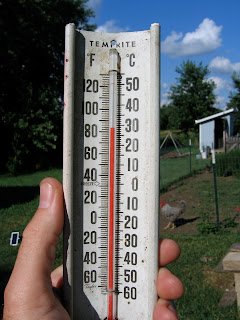 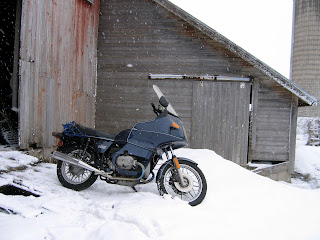 This photo was taken on March 28th, 2008 in Iowa county, Wisconsin. I was taking my old BMW out of the barn to do a preseason tune-up on it and wanted to note the irony of the moment. (it's a 1983 model with 'snowflake' wheels)

The crazy 'winter that never was' could throw us a major curve ball at any moment. The last frost date for my old Wisconsin home is late May. I don't think there was a day in Pittsboro this year that stayed below freezing and the lowest temperature we had here was in the low 20s.

This evening I read in the news that a tornado touched down in Ann Arbor, Michigan earlier today. That's just crazy.

I wonder what's going to happen with gardening this year? Do we wait until it's "time" to plant or do we just go ahead and plant now and risk the possibility of losing the early crops? Do we keep the row covers waiting at the back door just in case we have to run out and cover our spinach? Do you have a plan yet?